This is a diary for drawing & sound experiments. My attempt is to find new ways of thinking about drawing and making it.

I will ponder the relationship between the trace, gesture, sound and touch. I am inspired by connecting with the surroundings and matter, improvised acts of drawing and nonverbal dialogue. In this diary I will post images, sound samples and ask the following questions among many more:

The last but not least the reason for making this diary is the desire to learn more about sound technology and sound in general. I hope that some of you could be inspired or interested in following ones learning process in drawing and sound.

Matter and sound are so interesting to ponder upon together because they are inseparable and everywhere we go. From the drawing point of view, I think trace is often understood as something visible in matter, but how do we understand and study the invisible trace? I guess sound does leave invisible traces. Is a memory an invisible trace or is it actually visible, showing from someones body or the way we touch? Probably there are a lot of traces that first seem invisible, but later on we notice that they become visible. Those can be result of long processes like climate change or memory loss, aging or wearing and tearing of certain matter.

To clear out my mind about the basic concepts I am writing about, I went to read basic physics about how sound and matter interact. In the study portal Instructor: David Wood writes the following:

Matter is the stuff in the universe: the physical material which takes up space and has mass.

Sound is what happens when you transmit vibrations of energy through that matter. Sound is made up of wave vibrations. When you talk aloud, the motion of your vocal cords causes the air to vibrate. Air is made up of molecules, and as those air molecules vibrate, they hit each other. Because of these collisions between air molecules, a sound will spread out from one side of the room to the other very quickly. (How Do Sound and Matter Interact?, 2015)

Everything we could quickly understand as something immaterial, is atleast very closely binded to matter. What interests me here, is the way drawing can reveal, follow and let us study by making processes. By tracing the observed at least part of it becomes visible. It could be drawing/tracing the wind movement, passing of time, thinking process etc.

My personal interest is though more in understanding the process of making/becoming. Through thinking about the soundscapes created by drawing, I am trying to dig deeper into what is essential in the process of the one drawing. At the same time I am interested in streching the boundaries of what could be called as a drawing. Could a soundpiece be a drawing? or maybe right way to ask is could drawing be presented as a sound art piece?

Why it is important. I could say I have no idea, but actually I might. One reason to do this is to emphasise one important role / mission drawing has. To imagine, to create new worlds and to live through the process aware of it. Why then no visible lines? Well, I am not very interested in creating a dicothomy of any kind about visual/non-visual, but I feel that focusing on the other than visual aspects of drawing can open a whole new world in understanding it better. Also, there is a strong personal need to move towards a world where all perception, all senses could be noticed equally. I am not convinced that this is the case now. I feel that image and visualising has an important role, but there are alot of things one can learn from learning to listen and by touching not  forgetting our abilities to smell and taste.

Here I concentrate on listening and touching that are quite straight forward part of what I do.

I always start drawing from listening. It is listening to me. To draw simply means that there is a need and will to explore something. Then I will touch and listen to that.

I have recorded sounds of myself or others drawing for some years now. I will post some clips here in the diary for you to listen. As a comment to those sound samples, muy attempt is, what kind of knowledge can one find here? Some of these clips are part of a piece that I am currently creating to a group exhibition and later to a solo exhibition that will take place in Helsinki, Finland 2023.

Categories I will present year

2. Drawing with and among matter

5. Soundscapes that are based on my drawings and the composed (using drawing as experimental notation)

The sand I am using in this sound clip is from different sources:

From the arctic seashore in Finnmark, Norway and from Papinsalo island in Kuopio, Northern Savonia.

I was playing with the materials on top of a wooden table and a drumhead. There were certain improvised gestures inspired by the nature and state of the sand.

What was happening during these recordings was simply playing with the possibilities of sand that moves on the plate/drumhead. I tried to create different sound qualities, rhythm, melody, patterns and textures. When composing in Ableton, I played with simple ideas and basically studied the program while doing.

I was thinking about the space, time as well as how the different sounds play together. I tried not to edit too much what I recorded, but it is was challenging because of the possibilities what one can do to play with the sound. Next time different 😉

When I am listening to the sample it reminds me of the water, the movement of the waves. The movement that continues creating traces that repeat vanishing endlessly. The beauty of those traces is in their endless transformation and momentary nature. That reminds of freedom.

The images below present the process and the gestures made during the process of making. Swipes toward and away or passing the microphone, fingers swirling, fumbling, dropping on top of the sand and tapping the surface. 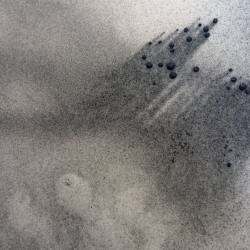 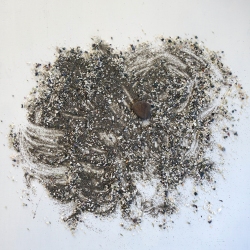 To continue from the previous experiment, I would like to dig deeper in different qualities and elements of the soundscape. What kind of sounds and sound qualities am I able to create with hands and sand? I will continue by creating another type of drawing/soundscape using the same substance, two hands in dialogue and mimicking each others gesture.

In today’s experiment, my attempt is to study the rhythm, the timing of events on a human scale; of musical sounds and silences that occur over time.